My real activity on 50 MHz started in the fall 1999, while I was living in Sweden, as SM6/IW4BLG in JO57wp.
To operate on 6m, I had to ask for a special temporary permission to Post och Telestyrelsen in Stockholm.
Once the swedish governemment granted it to me, I did start to work quite a lot with my IC706 and a small HB9CV built by Moonracker and bought from Wolfgang. 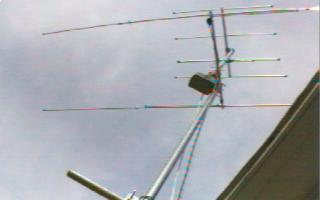 In spite of the poor station conditions, I run several QSO via Aurora during the fall and spring and even more by mean of sporadic E openings during the summer 2000.
On that period, I worked 5 fields and 49 squares with a Dx around 3800 km.

Due to the change of my job, in the fall 2000 I came back in Italy, and I set up my new station located in JN55rf, close to the historical town of Montagnana. During the spring 2001 with the help of Quick Yagi software, I designed and tested in my garden, a 3 elements yagi, with a very clean pattern that helped a lot to work in the QRM of the “neighbors” (many 6m station active in Italy). This antenna is widely descript in my Design/utility section. 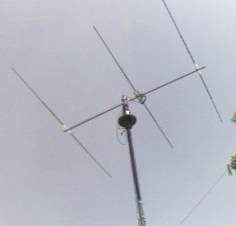 In order to make rooms for other activities, after some experiment and testing I took the decision to change over the beam with a Ringo vertical antenna, commercially known as Cushcraft AR6 that I bought from Leif and I have to say it perform very well.

My activity stopped on early 2005 and started again in 2007 with the new station.