My activity on 10GHz started on the late ’80s, due to the help, availability and good example of Goliardo I4BER.
He lent me his spare transverter (2 dB NF and 1W) to let me approach this new band.
I did started with a rectangular horn of 25 dB gain, then I moved to a 70 cm dish with a simple backfire as a feeder.
After some testing and some good QSOs with TK, OE, HB9, etc., often performed following the instructions of Carlo I4CHY, I left  this band for several years, but willing to come back, sooner or later…

In the fall 2001, I decided to get a new try on my new home, located in Montagnana (Italy) JN55rf.
Actually, the position wasn’t the very best for microwaves, but good enough to get a taste..
Therefore, I bought a DJ6JJ-like transverter,built and solt by a local ham. Round 2 dB NF and 200 mW “declared….” 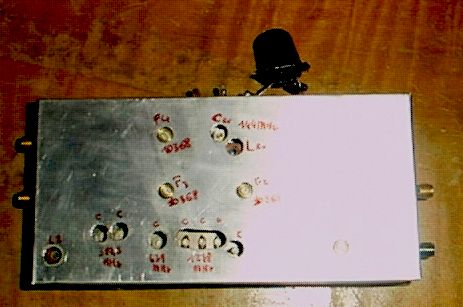 All the 10GHz gears were sealed in a box, fit behind the dish, moved by mean of a modified CD45 rotor at around 5m above the level of the garden.
At the same time, I took the opportunity to improve also the radiating system, building a swan neck to feed my dish. The feeding is a bit stressed, round -8 dB on the edge, but I believed this was a good compromise for terrestrial work with a so small dish.
When all was set up, my transverter started to give me serious problems, due to the very bad behaviour when used outside the lab… (coldness??)
With the kind help of Goliardo I4BER, we tried to get it working, but it was so badly built, that all our tries failed.. a real lemon!! be aware….!

So, my adventure on 3 cm band did stop before to start. Now I’m following another way to get there: the ATV, and this one seems to work!!